Learn about the benefits of a K-12 Community.

Ready To Become a Cardinal?

SCCS fifth grade teachers and students have continued their “Fun Friday” tradition during this season of remote learning. “As we thought about what we could do at a distance, on zoom, we thought it would be fun to bake chocolate chip cookies together,” said fifth...

END_OF_DOCUMENT_TOKEN_TO_BE_REPLACED

Elementary Students Learn About God Through the Life of Peter

END_OF_DOCUMENT_TOKEN_TO_BE_REPLACED

ALUMNI: WHERE ARE THEY NOW? 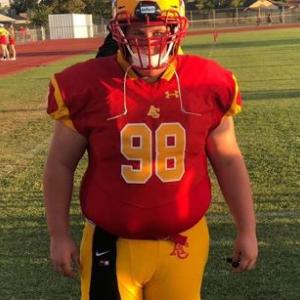 During his time at SCCS, Jacob played as a defensive lineman and helped the Cardinals win a San Joaquin League championship. He was twice named Lineman of the Year and recorded 33 tackles and 8 sacks his senior year.

Jacob is majoring in Communications with an emphasis in Journalism! We are proud of you Jacob!

Noah Nnabuo graduated from SCCS in 2018 and is in his second year at Delaware State University. Noah is majoring in Pre-Med Biological Sciences. While at SCCS, Noah was a two-year varsity football letter winner. He was also selected as the school’s Athlete-of-the-Year and the football team’s BestDefensive Lineman during his senior season. He helped lead the team to a league championship and he was selected as All-San Joaquin First Team (defense) and All-CIF Southern Section (offense) as a senior.

“SCCS prepared me as a student-athlete by teaching me to work hard and to be disciplined,” said Noah. “This has helped me transition into my college career! To all the student athletes, focus on your priorities. Do not deviate from the task at hand.”

"Go therefore and make disciples of all nations."
Matthew 28:19a